This page is for Dan’s narrative blog - games with his Seraphon in the Age of Sigmar.

The Slann Starmaster stirred in his sleep. His incorporeal attendant startled with the low croak from the ancient creature. So rare was it to hear noise from his master, the Skink Star Priest Makapaptec looked around the temple chamber to confirm in his mind that the sound had indeed resonated from the Slann. His master, the Slann Immozaan, had been in his sedate state for as long as the priest could remember. Of course, that didn’t mean much as Makapaptec had only been ‘alive’ in any real sense, since the point the Slann summoned him from his vast memory.

The priest could remember a time before he returned to his masters side however, from serene jungle landscapes, to horrific flashes of world ending slaughter. He tried not to focus too heavily on these memory fragments, both as it made him uncomfortable, but also strained his mind when he attempted to focus on the specifics. It was like he could see the events of the days past, but not with any clarity. Makapaptec knew that now was not the time to concern himself with the past. The Storm Lord Sigmar had released his wrath upon the mortal realms and as a result the Temple State had never been more alive with action. Since Sigmar’s storm of star-born warriors had been sent from the heavens, more of more of his brethren had been ‘reborn’ into life.

Makapaptec looked up at his master, bathed in the star light arching through the space high up in the temple chamber’s celling. The Slann Starmaster had been contemplating the various threads of the future for many hundreds of years since he made the decision to enter his current slumber; a state that to an outsider who did not understand the ways of the Slann, would appear like hibernation. He knew better. The priest knew that this sudden croak was a signal, a sign to open his mind to the Slann. He did as was commanded.

In a brilliant flash of bright light the priest now felt himself suspended in space, a vast sky surrounding him. A sky that felt so vast that he felt it could not have a beginning and an end. He could feel he was in the presence of beings of awesome power, Azyr energy flowing through him. As a Seraphon he had a sense for the power of star beings, being almost kin. The power he felt here was. . Ancient. He guessed that the constellations he saw before himself were probably not just stars, but Drake Spirits. The spirit guides used by the Starmasters to help navigate through the celestial plane, to aid the ability to distinguish the threads of time the Slann manipulated. Makapaptec had witnessed his master’s work before like this, shown his inner thoughts so he might better understand Great Plan. He knew these threads were everything to the Slann, they were the way in which the Slann determined what action they should take in the Mortal Realms, if any.

With the arrival of the age of Choas, his master had shown him previously the change to these threads of time, and he had witnessed how the they had become almost impossible to chart. He had watched the various strands of time rotate in front of him, watched Immozaan try to view all of the possible futures and study the outcomes. He had seen the struggle, even for a being of such awesome mental capacity, to determine how he should best enact the Great Plan. While his master searched the threads, he could see the constant change, the battle against other powers, evil and corrupt powers, trying to confuse and mask the future from his view. As a result it had been an entire age since Makapaptec had witnessed Immozaan’s armies called from the Temple State into action. What he had seen these last few days had been a result of preparations and study centuries in the making.

At Immozaan’s command, the threads of time whirled around Makapaptec. He saw flashes of action, stories both past and present, futures that may come to pass. He noticed one such thread had been surrounded by a thin, incorporeal form. He had never seen one of these beings before. He had sensed them, but this was his first encounter with a Drake Spirit. A small serpent like form, no bigger than the priest himself, that to the eye appeared to be constructed of thousands of tiny stars, coiled around the thread illuminating it to the priest. The other wave forms subsided, leaving this thread in front of him.
Makapaptec focused on the thread, but his mind could not absorb the entirety of the vision. The vision streamed passed him, following through his body. As it did so he caught flashes of scenes, visions. He saw locations, starborn warriors, scions of chaos. He saw death and destruction, but he also saw light. Fantastical light. Light and a sense of. . . Hope. Hope, something he could not recall ever seeing in a thread. To him, he knew the concept and feeling of hope. He was sure his master only saw logical or mathematical problems and questions, almost binary in their choices. But the priest could feel. He still could feel.

The vision ceased flowing through him, coming to an abrupt stop, the Drake Spirit now in front of him, circling a shimmering pool of the thread in from of him. The edges of the pool appearing like celestial waves crashing against an unseen shore. At the centre of the pool the priest could see an ancient artefact, he recognised instantly as a Plaque. He had not seen one of this type since. . since the World That Was. The Drake Spirit began to rotate around the vision of the Plaque, moving so fast a hum of sound began to emanate, faster and faster the Spirit whirled. Then he saw it, the scripture written in the old tongue. It seemed to illuminate a bright orange, to burn almost against its background. He could make out one word:

The priest suddenly fell back, light surrounding him one moment, gone the next. He found himself back on the moist temple slabs, looking up at his master. He took a moment to compose himself, the enormity of what he had just seen still flowing though him. He needed no words from his master, he knew what must be done. This Plaque most be recovered. The legends of Quango were imbedded in the lore of his people. The thread of hope he had seem must be in some way linked to the Plaque and he would seen it returned. With that, he turned, pulled his staff from the clasp on the wall and strode through the archway. It was time to March - The armies of Immozaan, Slann Starmaster, Apprentice of The Eternal, Second of his Spawning, would be released once more unto the Realms.

So, with that it was time to get to the tables!

My first game for the blog was against fellow club mate / Silver Tower Party mate James and his WoC. James is known for his power gaming armies, so this was an interesting test in how this translates when playing narrative style. The answer was - very well!

Id been super keen to play something from the Dreadhold book for ages, a scenario I thought scaled very well from small games right up to big ones, as you could vary the wounds and/or quantity of the towers. The basics were, you needed to capture or destroy all the towers. 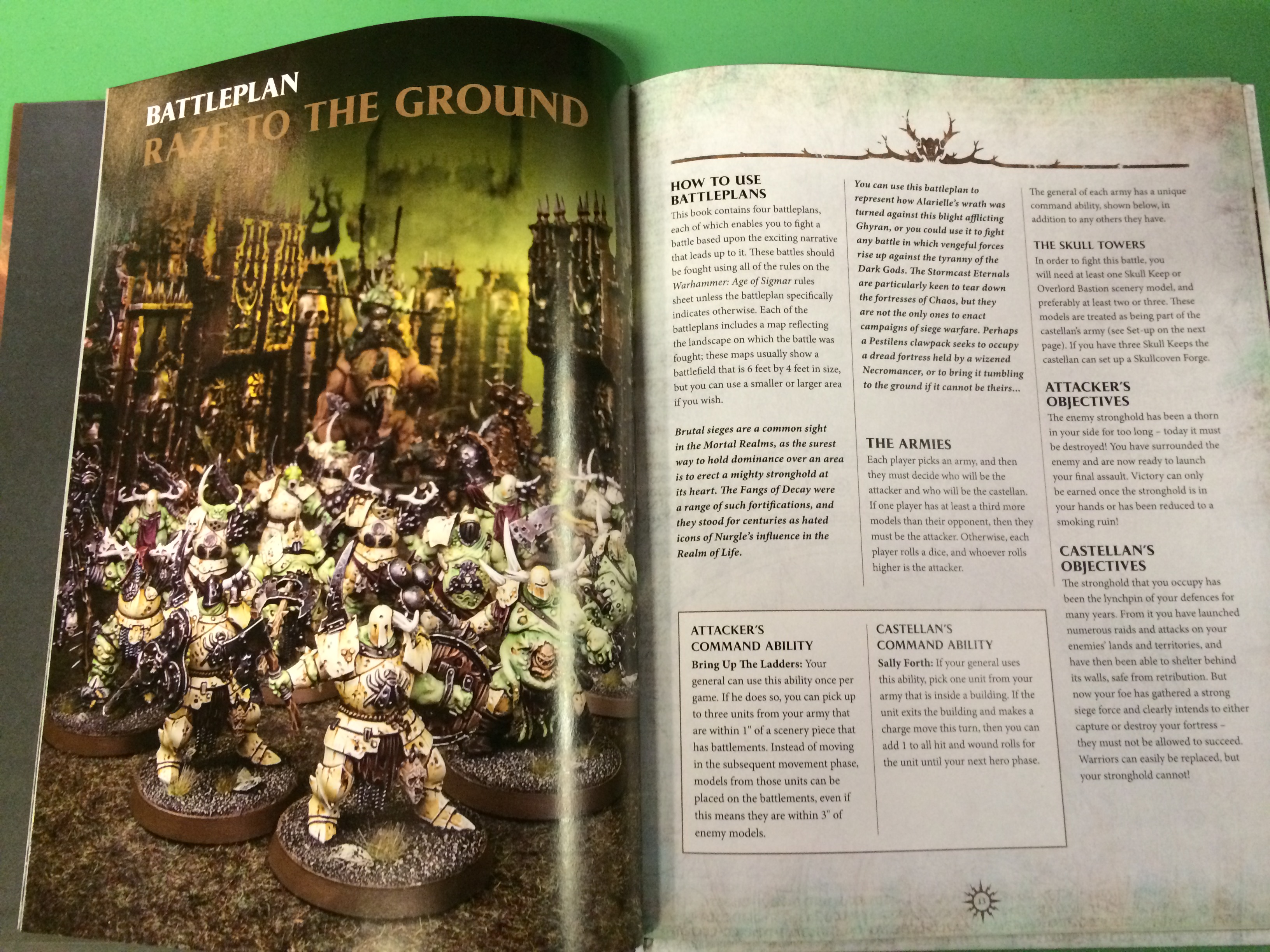 The narrative was that the Seraphon have marched to this point for the hidden realm gate beneath the buildings, so for me destruction of the towers was the more ‘themed’ in game outcome. Having played the scenario it was probably the easier outcome as well!

When playing narrative, I am quite keen on some sort of mechanic to allow you to ‘re balance’ during the battle, in case you have inadvertently one sided the game in some way, so we used these Time of War rules (one of my favourites) from the Hanging Valleys of Anvrok. Not only do they give you a cool spell and a great ‘moon’ affect each round, you also get the ability to ‘pray’ and bring down more troops.

As I could summon 3 units a turn if needed, provided the Slann didn’t die, that was plenty for me. 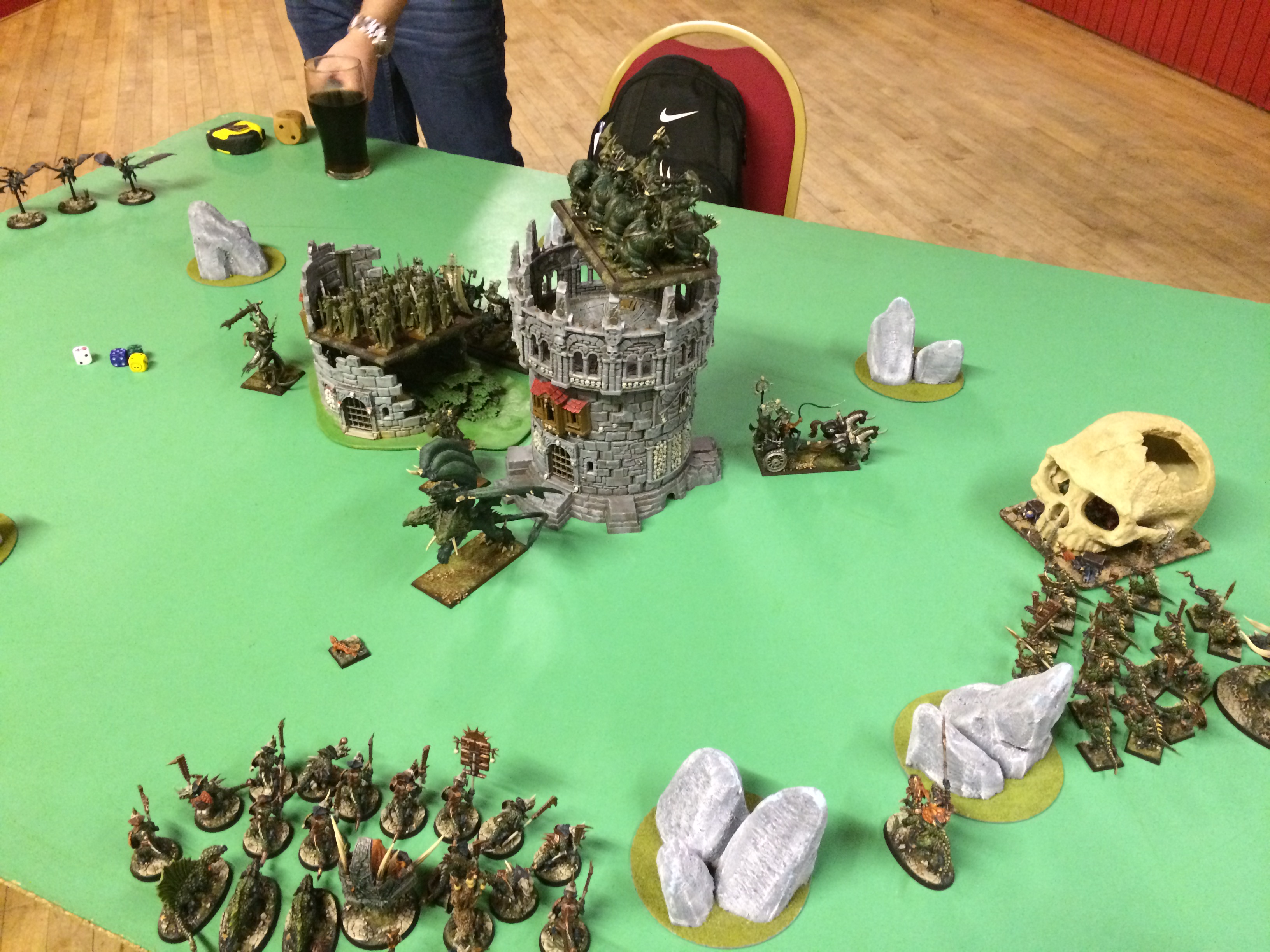 At this point, James had charged everything out and although it might look like I was struggling to capture the buildings, I had a great turn where I managed to summon a salamander who blew up a building and swung it to the point it looked unlikely I was going to loose. (You will see the summon of this ‘super’ salamander is a theme in the first two games….)

So…. he ‘prayed’ to Chaos and was rewarded with a ton of Daemon units! Originally he rolled a 1 on the chart and got turned into a spawn…. so we decided to let him roll again, but his general still became a spawn! I have this one Kroxigor, who I tell my opponent ‘has got a reputation’ (him and the skink priest Makapaptec). He was true to his word and solo’d a Daemon Prince…. I still need to name this Krox, although I like the idea he is just ‘The Unamed’ or similar (Bit of fluff incoming!) The game ended really close, where on the last turn I was able to get a scar vet into the building and do the final wound for the win! The Realm Gate was obtained.

I then rolled on the Triumphs table, another piece of ruleset that I don’t think gets used that often. Sadly my reward was amazing for me, but cool regardless. And there ended game one!